Does what you're doing with your life really matter?

Does what you're doing with your life really matter?  It can be a question that burns our souls and it's the question that got Amy Kauffman started on CrowdCause - an incredible organization that funds local non-profits.  "I realized that it wouldn't matter if I stopped doing my job.  No one's life was being changed."  That's when Amy's husband, Nathan, encouraged her to quit her job because she didn't need to work just for the sake of working.


Amy grew up with what she calls a stable, fantastic life.  She was born and raised in the same town and she had a great relationship with her parents who have been happily married for more than 30 years.  She said that generally speaking if she wanted to do something, she did it and was successful.  "My life was way rosier than the way most people live.  Then I realized to whom much is given, much is required."

Her journey to finding her dream job took several twists and turns.  She got her undergraduate degree in communications because she figured she could use that anywhere.  She worked in nutrition, home building and was a nanny.  That was when she asked the question, "Does what I'm doing really matter?"
She quit her job and wrote the book Organize Schmorganize which she self published.  Then she thought, "If Oprah picks up this book, I'll be the organization lady."  It was a great muse, but not what she wanted to do with her life.

She had been mentoring girls at her church, enjoyed it, and wanted to mentor girls coming from less stable homes.  She did a Google search and found Women Helping Girls and started mentoring through them.  She eventually became their event coordinator, which gave her connections all over Rochester and was her entry point into the non-profit world.
"These organizations need money and we wanted to give them money, but how do you become a philanthropist without being independently wealthy?  I wanted to be a catalyst - I wanted to make things happen on a bigger scale."

Nathan works in marketing and when Groupon first came on the scene he began researching the company to see what could be learned from its dynamic business model.  He learned that the company was receiving 50% of the profits from their sales, which adds up quickly. Together Nathan and Amy realized that if they could start something like that, it could be a great source of income for non-profits in Rochester.
The concept for CrowdCause was born.  Amy incorporated the company and developed contracts.  Early on Golisano Children's Hospital and Special Olympics signed on.  Right now there are 20 non-profit partners and 50 more in the works. 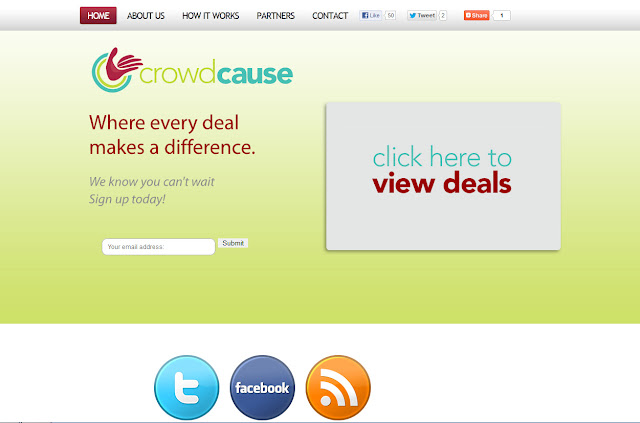 Currently CrowdCause hosts one deal per week.  When you purchase the local deal, you can choose which affiliated non-profit you want to support.  But there are big plans on the horizon.  Soon Amy will be bowing out of the deal business in order to create a discount card program.  Members will pay a monthly fee to join, which will go directly to the non-profit of their choice, and local businesses will offer card holders special discounts.  Amy is looking forward to the change because everyone will win.

When I asked her what the challenges have been she listed several.  "The hardest thing has been that nothing is familiar and I hate that."  She admitted that she's a "boot strapper" so she prefers to do things herself.  Learning how to manage her time wisely and make meaningful connections has been key so far.
She's also struggled with priorities.  "I love to work on something I love to do.  I want to focus on this but some friends aren't going to wait around for me, so I need to make time for relationships."


CrowdCause offers half hour meetings every other month for interested organizations.  You can contact Amy here or by e-mailing amy@crowdcause.org. "We want to encourage the non-profits.  CrowdCause is about generosity and winning for everyone."