The kids collapsed in contented exhaustion after approximately 15 seconds in bunk beds filled with forest creatures.  They were holding a squirrel, raccoon and chipmunk respectively - and also their wands topped with unicorns and dragons, sleeping on raccoon pillow cases and dreaming of pruned fingers and the aroma of chlorine.

We've begun a love affair with Great Wolf Lodge.  We've been to Splash Lagoon and it was okay (and farther), but GWL is a pinnacle of vacation-top experiences.  I guess it's not just the water slides that we come for (though I'd be lying if I didn't admit that my husband and I relive our adulthood by sneaking in some grownup water slide time).  It's like the Disney World of water parks.

Consequently it also has a price tag like Disney's, but I am uncharacteristically willing to part with the numbers in my bank account to have a Great Wolf Vacation.

The internet is miserable and the swim towels are the size of my dish towels but at the end of every water slide the attendant asks you how the ride was.  My two year old was about to tantrum because he wanted all of the water in his empty second cup.  While the other adults are at the buffet, I'm nursing the baby, eating my dinner and trying to convince him that it won't matter in 10 years, a teenager who was busing a table behind us said, "Can I help him with that?"  Even the people who empty the garbage tell you to have a Great Wolf Day.

I called for a pack and play and when I came back it was set up and even had a sheet.  I called once.  Unlike the shower chair I ordered for my special needs son that cost $400 (insurance paid) and was not the right thing.  I was told "it's what you ordered."  It's also unlike the guy at the other rehab place who never returned my phone calls.  And it's unlike the 15 pages of private duty nursing documentation Medicaid bounces because I forgot to fill in the date.

It's (mostly) a departure from bantering siblings and driving anywhere. 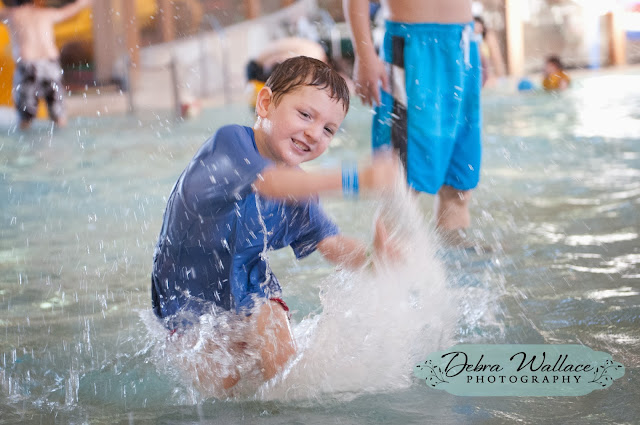 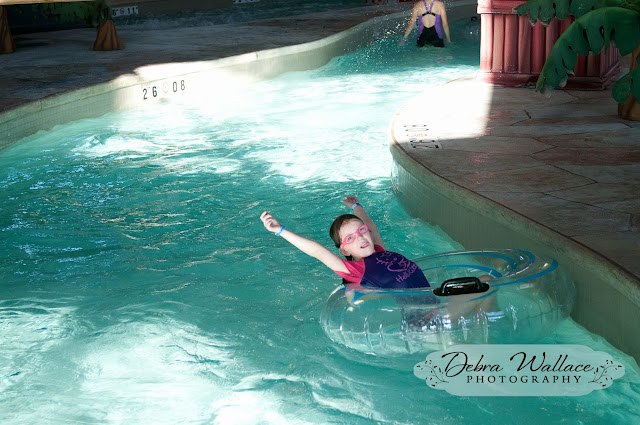 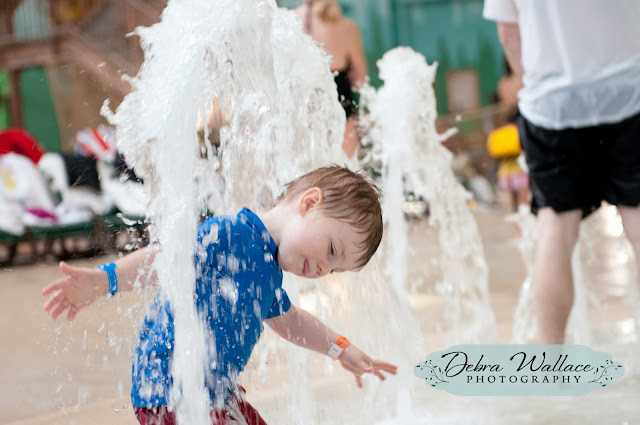 A middle age man in the hot tub commented that the food wasn't very good, and then said, "Do you want to get pizza?"  I'm thinking, "They have salmon and gnocci with cream sauce!"  A foodie's buffet.  Oh, and creme brulee.  If you're five, then the all you can eat dinosaur shaped chicken nuggets are better than Jake and the Neverland Pirate and his ship that you got for your birthday.

The gift shop is not like the dollar store.  The prices are what you would expect, but the quality is such that you don't mind grandma indulging a little, until a sign on the wall points out that retired grandmas are busy spending their kids' inheritance.  Then maybe you'll encourage her to put some stuff back. 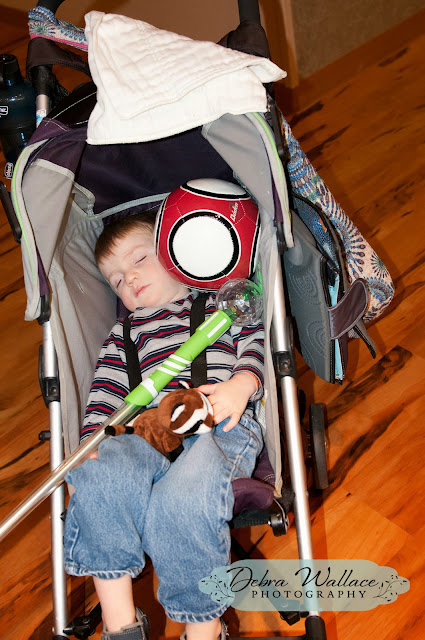 Then there's Magiquest.  A veritable utopia of wizards, dragons and barefoot children frantically searching the hotel for virtual treasure and bumping into every third adult they pass.

There's also the Scoops Kids' Spa, the Cub Club, the arcade (Las Vegas for kids), and the talking animals in the lobby. 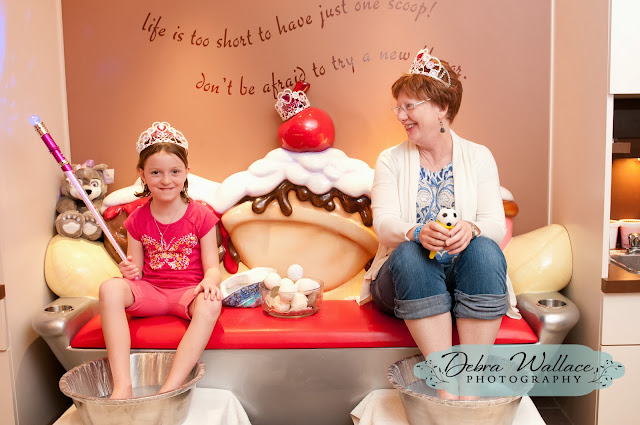 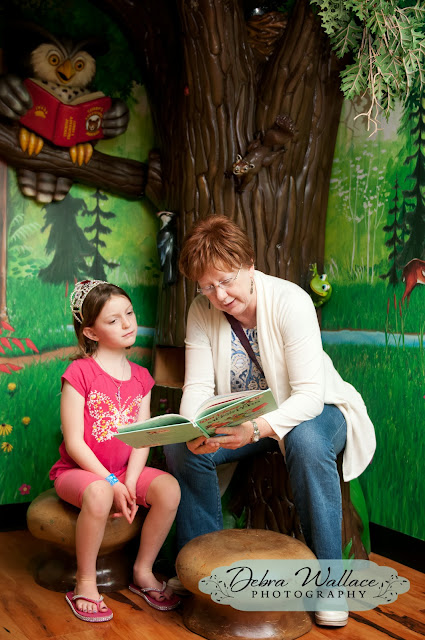 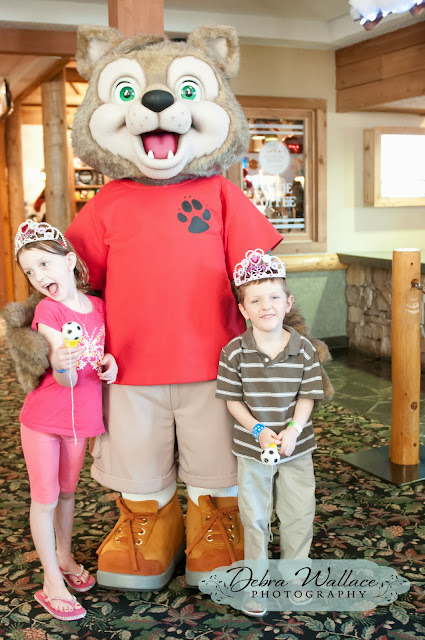 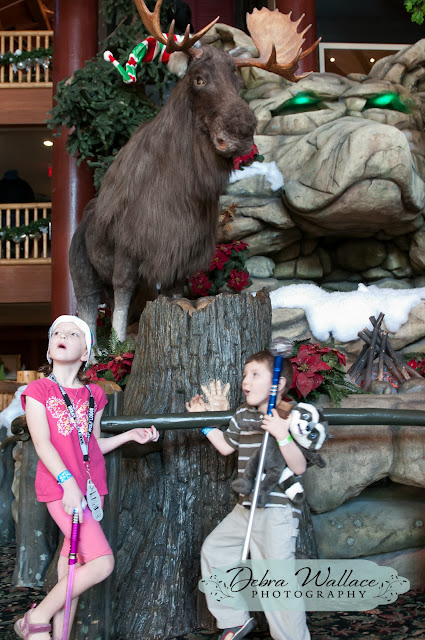 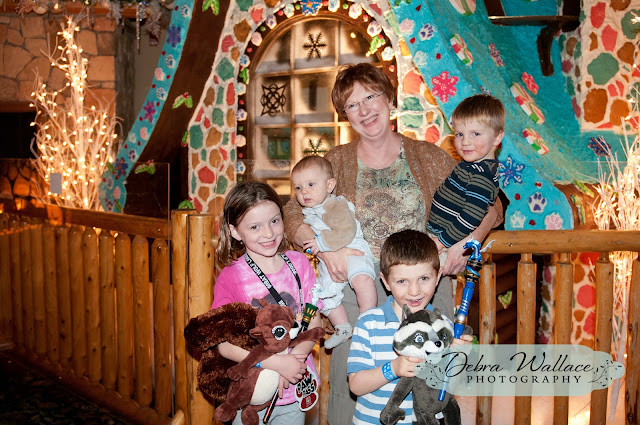 Even my husband was happy and arguably more excited about MagiQuesting than the kiddos.  The only one who was unhappy was my camera - which may have audibly groaned in the low light conditions.

On the little card the cleaning person leaves it says, "we value your family traditions."  Yes and Amen.  It is, as they hope, becoming a family tradition.  I know my kids will pretend to be wolves for at least three months, wear their GWL paraphernalia for at least one year, and talk about "next time" until it happens. I'm so thankful for great vacations!